FOTM Raises Over £600 for Navy Wings 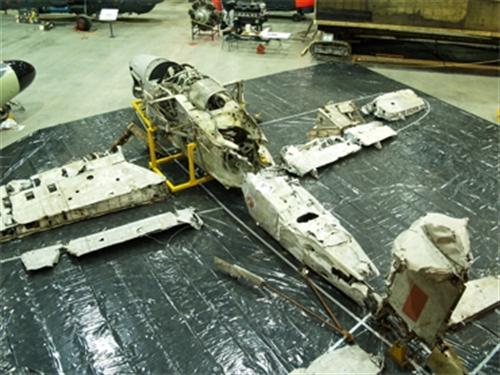 Over 30 rare and important aircraft will be on display at the Fleet Air Arm Museum’s Reserve Collection Open Day on Thursday November 1st including the amazing reconstruction project of the world’s only remaining Barracuda torpedo bomber.

With over 2500 aircraft built, the Fairey Barracuda was the Royal Navy’s most prolific aircraft during WW2 yet unlike other more iconic aircraft of its era, none were retained for posterity.

The Barracuda restoration project is a joint initiative with KVPL/Blue Bird Project who made world news for their ground breaking restoration of Donald Campbell’s Blue Bird which was retrieved from the depths of Coniston Water in 2001.

Crumpled pieces of Barracuda officially recovered from as many as six wartime crash sites will be used. Each piece will be transferred to the KVPL’s workshop inNewcastlewhere they will undergo a unique process involving softening, straightening, stretching and reforming of each piece.

The crumpled pieces of aircraft and the completed nose section will be seen positioned as if a gigantic crime scene was being investigated.

Says Curator of Aircraft Dave Morris, “We have been collecting sections of Barracuda since the early 1970s. We were able to rebuild the nose section a few years ago, however only now, through the revolutionary restoration methods developed by the KVPL, has the process of identification and restoration of the rest of the aircraft become feasible”.

Other exhibits on display will include with the world’s oldest surviving aircraft carrier – a WWI Thorneycroft Lighter along with a number of unique aircraft including the locally manufactured Westland Wyvern.