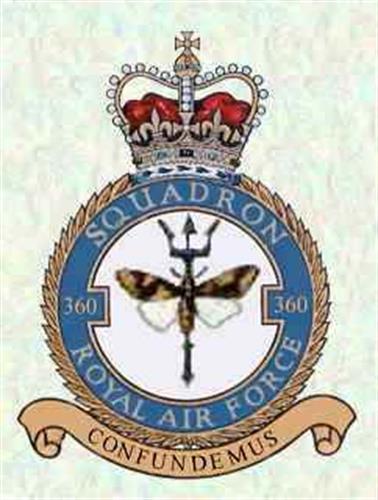 The very last Reunion Dinner 2016 To mark the Golden Anniversary Year of the formation of No 360(RN/RAF) Squadron is Planned for Saturday 29th October 2016 at the Officers' Mess, Joint Forces Command (RAF) Wyton. Background The squadron was created from the merger of the personnel of 831 Naval Air Squadron of the Fleet Air Arm (previously operating the Fairey Gannet ECM.6) and 'B' Flight 97 Squadron RAF (flying English Electric Canberras at RAF Watton on 1 April 1966. Initially it was known as Joint Electronic Warfare Trials and Training Force before being given its official designation of No. 360 [RN/RAF] Squadron on 23 September 1966.

The squadron flew a number of Canberra types: B.2s, T.4s (for pilot training); a B.6; PR.7s and E.17s. The first Canberra T.17 was delivered just before Christmas 1966 and this type soldiered on until disbandment in 1994. In 1991 360 Squadron achieved 25 years of service, and was presented with a Squadron Standard. No. 360 Squadron had many unique aspects: its role, its number had not been previously issued, and it is the only squadron to have been formed, awarded a Standard, and disbanded during Queen Elizabeth II’s reign. (taken from Wikipedia)