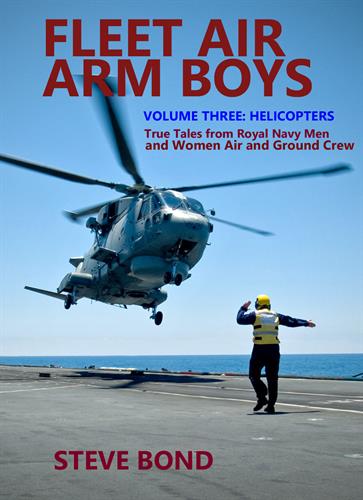 Helicopters have been going to sea with the Fleet Air Arm for over 70 years. Initially used for search and rescue (SAR) duties from aircraft carriers, the rapid development of both the helicopters and service experience resulted in them taking on the vital anti-submarine (and later anti-ship) attack, Commando support and Airborne Early Warning roles.

In this, the latest in the four volume 'Fleet Air Arm Boys' series, the words of the men and women themselves, aircrew, maintainers, handlers, et al, are brought to life by Steve Bond and represent every helicopter type operated.

The book will be launched at the Fleet Air Arm Museum on Saturday 9th July 2022 from 10 o'clock onwards. There will be eight signatories present who have served over those decades, plus the author and there will be a great gathering of past and present FAA people from both the rotary and fixed-wing fleets.

Copies of the book can be ordered in advance from Navy Wings (who benefit from each sale they make), for collection on the day if desired, or bought on the day.

Tickets for the event can be booked on the FAA Museum website.