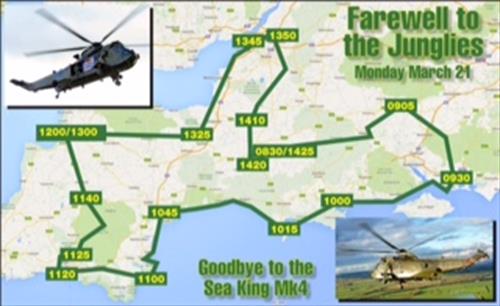 PLEASE turn out in force across Southern and South-Western England on Monday March 21 as the legendary Sea King Mk4 conducts a farewell tour.

Five of the troop carrying green helicopters, which have carried Royal Marines into action for more than 36 years, will stage a five-hour ‘goodbye flight’ around the locations most associated with them on home turf.

As with their fellow Fleet Air Arm Sea King units which are coming out of service this year – the search and rescuers of 771 NAS and HMS Gannet – 848 Naval Air Squadron are conducting the formation fly past – and are hoping for a good turn-out.

Setting off from their base at RNAS Yeovilton, home of the Commando Helicopter Force, the ‘Junglies’ (a nickname they owe to their forebears who fought in Borneo in the 60s), at 8.30am on Monday March 21, the Sea Kings will pass over:

Landing back at Yeovilton at 2.25pm.